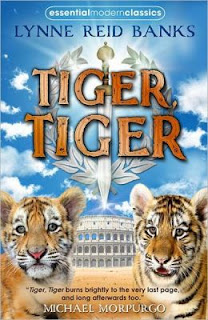 Plot: The story opens with the capture of two wild tiger cubs from their jungle home, then follows them into the dank belly of a ship bound for ancient Rome. The stronger cub is immediately chosen to be trained for Caesar’s games, where he will be set loose in the coliseum to fight gladiators to the death. He is known to his tormentors as Brute. Caesar’s plans for the smaller cub, however, are quite different: he is to be a pet for Caesar’s coddled daughter Aurelia. She names him Boots, and while Brute learns to lash out at humans with all the ferocity he can muster, Boots lives a life of luxury as he is pampered by Aurelia and cared for by her slave and animal keeper, Julius. But Aurelia’s idyllic existence starts to tarnish when she is taken to the coliseum for the first time and sees the violence her beloved father considers entertainment. Meanwhile, her cousin Marcus is becoming jealous of Aurelia’s growing affection for Julius, and he plans a prank that backfires horribly. The climax of the book reveal’s Rome’s cruelties to Aurelia and even to Marcus, but it highlights the power of family and love as well.

Adult themes: The book is certainly appropriate for most kids nine years old and above. Be warned that animal lovers will find plenty of moments in the book to be cringe-worthy, however, and some of the people in the book are treated cruelly as well. Too-young readers may struggle with the idea of Aurelia’s father arranging her marriage.

Our Take: This unique and wonderful book by one of our favorite authors isn't as well-known as her Indian in the Cupboard series, but we found it just as compelling. Banks paints a living, breathing portrait of third century Rome that will make readers feel as though they’d stepped into a time machine, and the characters, even the minor ones, are sumptuously vivid as well. Brief scenes, such as the one in which Marcus’s father wrings his hands over pleasing Caesar even though they are related, or when Aurelia must put on a show at the coliseum for her father’s subjects despite her true feelings, will impress upon young readers the absolute power of the Caesars more than any history book could. One thing we really love about Banks is that her language and vocabulary are rich and complex – there’s none of the watered-down prose one sees too often in young people’s literature. Most sophisticated words are clear in context, but parents may wish to challenge kids to keep a list of words they can’t figure out on their own to make this book even more enriching.