We keep a large glass bowl of brains in our office -- the squeezable plastic kind, which we give to the younger students we see. They come in all sorts of bright colors and children always seem very pleased to receive a brain at the end of the day. They like to toss them and to show us how flexible they are. 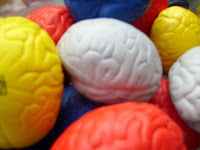 An article in last week's New York Times reminded us that it is not just toy brains that are flexible. It told the story of a man named Henry Molaison, known only as H.M. during his lifetime. Mr. Molaison had surgery in 1953 to attempt to control severe seizures. Doctors removed two small sections of his brain, and although the procedure was successful in controlling his seizures, it destroyed his ability to form new memories. Now, a year after his death at age 82, doctors are beginning an examination of his brain, not so much to see what was destroyed, but to examine something that became evident as doctors worked with Mr. Molaison over the decades after his surgery -- the emergence of new pathways that seemed to enable him to form different kinds of memories, those for tasks rather than for facts and events.

We see the wonderful flexibility of the human brain in many ways. We know that many young people who exhibit poor judgment and impulsivity in adolesence go on to be thoughtful, acomplished adults after their brain finishes fully developing in their twenties. We know that appropriate reading interventions can change the brains of students with dyslexia and other reading disorders in ways that can be documented by scientists.
We have learned about studies of individuals with damage to one area of their brain who develop new pathways to enable them to perform functions they might otherwise have lost. Those who have seen Dr. Yellin speak about resilience and neuroplasticity have heard of how young people can overcome significant obstacles to emerge as competent and happy adults.

People like Mr. Molaison remind us how inappropriate it is to label people by the deficits that they have to be contending with at any point in time. There is good reason to expect that every struggling student has the real potential for success in their studies and their lives.
Posted by Yellin Center for Mind, Brain, and Education at 12:26 PM