Here, There, and Everywhere

Our office has recently undertaken an armchair trip around the world. It began with a question we posted on the ten foot long blackboard that runs the length of one of our hallways: "Where are you from?" Students of all ages took a moment from their busy day at the Yellin Center to add their replies and to list what they liked best about New York City (the Empire State Building, toy stores, and "my house!" topped the list). 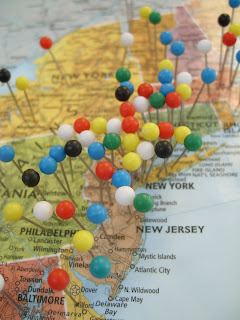 We had always known that families came to the Yellin Center from not just the New York Metro area, but from all parts of the country and from overseas as well. We've just been too busy to think about just how broadly our work has become known. So, after seeing some of the states and countries listed on our blackboard, we decided to look a bit more closely at where the students we work with are from.

We took a couple of maps, one of the U.S. and one of the world, and marked them to show the homes of the students we have seen in just the last couple of years. We were amazed to find that we had markers in five continents, 14 countries, and 34 of the United States, plus the District of Columbia! We are pleased to be an important resource for students and families in the New York City area and equally pleased to see that families come to us from all over the world.
Posted by Yellin Center for Mind, Brain, and Education at 9:30 AM